A new concern has been the focus of discussion about whether or not a vaping device can be used for illegal drugs like crack cocaine. Vape devices include e-cigarettes, vape pens, and vaporizers or MODS. All vape devices have the same components which are a cartridge for containing the e-liquid or e-juice, a mouthpiece, a battery, and a heating component that is powered by a battery. None of these vape device operating pieces were designed for vaping a substance other than liquid nicotine or liquid CBD oils. 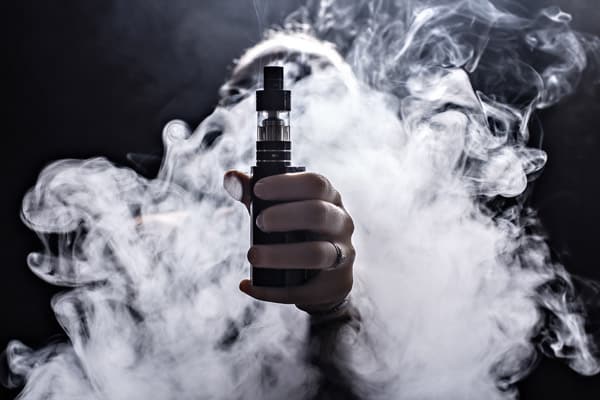 The concern is that more and more young people are altering their vape devices to try and attempt to make them compatible with vaping crack and other drugs. The research that has been completed about this potentially dangerous trend is sparse. The National Center for Biotechnology Information (NCBI) conducted a study on the ‘Use of Substances Other Than Nicotine in Electronic Cigarettes Among College Students’ recently. A total of 1,542 undergraduate college student e-cigarette users were asked if they had ever vaped anything other than nicotine in their vape device, and the 7% of the participants said yes.

Although the results of the study were not hugely alarming, what was worrisome is that because vaping nicotine is perceived as safer than smoking tobacco the same presumption may cross over towards hard drugs like crack, heroin, and meth.

Regarding the potential dangers of this young population using substances more dangerous than cannabis in e-cigarettes. Knowledge is limited regarding the public health impact of vaping cannabis or other illicit substances among college student populations. This study stresses the need for continued research regarding the vaping of cannabis and other illicit substances among college students… Among college-aged adults, the perception of e-cigarettes is generally favorable, and many of these young individuals are willing to experiment with e-cigarettes. This favorable perception and willingness to experiment is linked to beliefs that e-cigarettes are less harmful than traditional cigarettes. Furthermore, studies have found that individuals also perceive the use of substances such as cannabis to be safer when vaporized versus combusted (NCBI).

As the drug addiction epidemic continues, we expect more research to be done in this area. The vaping trend is exploding in popularity and now is a multi-billion dollar industry. Analysts expect the growth in interest to continue for years to come as less young adults are smoking traditional cigarettes.

Vape Devices and Other Illegal Drugs

Other less formal polls have been conducted and confirm the findings of the NCBI, that young people are experimenting with illegal drugs in their vape device. The United Kingdoms media publication ‘The Sun’ published an article about the results from a poll conducted at Kings College in London. A solid 39% of the people polled admitted to vaping drugs other than nicotine in their vape device.

Dr. Matthew Blundell and colleagues at King’s College London polled 861 people, e-cig users. Some 39 percent admitted vaping illegal drugs. Up to 2.6million Brits use e-cigs, so about a million may have used them illegally. Rogue substances can be added to water then vaporized, or e-cig liquids containing drugs can be bought online. Other drugs reported as being vaped include ketamine, GHB, and LSD. (The Sun).

A vape devices do not heat crack, heroin, or meth to a high enough temperature to vaporize them. Documented attempts report that the filters in the vape devices clog and therefore ruin the drugs altogether. Vaping nicotine has become one the most addictive pastimes, masked as an improvement in health or lifestyle. Younger generations have been fooled into believing that vaping is less harmful and therefore, less addictive than smoking cigarettes, but this is simply a lie. The nicotine content in vape liquids is 3-4 times higher than in a regular tobacco cigarette.

The biggest concern about the issue of vaping and illegal drug use is developing an addiction. Crack cocaine is one of the most addictive drugs because of it’s instant and powerful high. Crack cocaine addicts go on binges that last for months and years at a time. The overwhelming feelings of euphoria that crack-cocaine causes are extreme, and this is why crack addicts continuously smoke crack once they start, they are forever chasing the high.

Attempting to vape anything other than what a vape device was developed for is extremely dangerous. By altering a vape device, a person risks poisoning themselves, causing irreversible lung and brain damage as well as causing permanent damage to their health. If you or someone you know is attempting to vape crack or other drugs, there is help available. Recreate Life Counseling has crack cocaine drug programs that have helped people quit and remain off crack for good.

Our programs are successful because they utilize evidence-based forms of therapy to treat crack addiction. Our cross-disciplinary team of psychiatric, medical doctor ns addiction recovery counselors works together to design an individualized treatment plan tailored to meet each client’s personal needs.